The Old Course at St Andrews

11 holes out, the same 11 holes back, and starting and finishing on the mound behind the first tee: Such was the way that golf was first contested over the links at St Andrews. But despite this unfamiliar description, today’s golfers would recognise the ‘Old’ Course of the 1700s and note that the challenges it presented have changed little in three centuries.

As legend has it, the game has been enjoyed en masse on the links since the 12th century, when shepherds would knock stones into rabbit holes with rudimentary clubs. By 1457, the popularity of the game had reached such a level that King James II outlawed it for taking men away from their archery practice!

And in 1552, on the proviso that Archbishop of St Andrews, John Hamilton, was able to retain possession of the rabbits on the course, the town’s right to play golf on the links was officially established.

Fast-forward 200 years and the custodians of the course, by this time the Society of St Andrews Golfers — later to become The Royal and Ancient Golf Club of St Andrews –, take the decision to reduce the number of holes from 22 to 18, so creating the format that would come to represent the standard course layout the world over. Yet there was still one hole on each green, which was played twice; the homeward groups taking priority over those on their way out. Teeing-off occurred by the hole-side and the course meandered around and through dunes and narrow corridors in the whins.

In 1832, golf on the Old Course made its next leap towards the modern game. Two holes were cut in the putting surface, creating the double-greens for which St Andrews has become so famous. Soon after, separate teeing-grounds were created, fairways were widened both naturally and unnaturally, and golf began to be played in a left-hand loop from — as today’s golfer would understand it — the first tee to the 17th green and following the inland holes to the turn before retuning on the seaward half.

It was quickly recognised that playing the ‘right-hand loop’, as it was known, had many virtues and for 30 or 40 years the layout was altered from day-to-day and from week-to-week. Indeed, on one day a year, golf is still played ‘backwards’ on the Old, bringing into play all those bunkers which, on first encounter, reveal no rhyme nor reason for their location.

The construction of the first green on the far side of the Swilcan Burn in 1870 represented a more permanent move towards the modern right-hand-loop. Records of play on the left-hand-loop continue — including the Amateur Championship of 1886 when Tom Morris Senior, then the 65-year-old Keeper of the Green, forgot to set up the course correctly — but by 1873, the year of St Andrews’ first Open Championship, the favoured loop was the one that would go on to welcome Arnold Palmer in 1960, Jack Nicklaus in 1970 and Tiger Woods in the year 2000.

The Old Course has now staged 27 Open Championships and will look forward to hosting its 28th in 2010. Card of the course 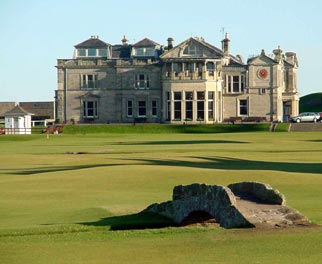